Pre Control is a simple, easy to use, very visual method for monitoring processes.

ii) can be used with either variable or attribute data.

iii) are useful during setup operations – can determine if the process setup is producing product within required tolerances.

iv) can identify if the process centre has shifted or the spread has changed.

Pre control utilizes a chart with three color bands, namely Green, Yellow and Red. Small frequent samples (sample size usually set to two units) are taken from a process and checked versus specification requirements. The measurements recorded will indicate where the sample resides within the colored bands. The results will indicate if the process is operating within control, is deviating out of control or needs to be stopped and corrected. 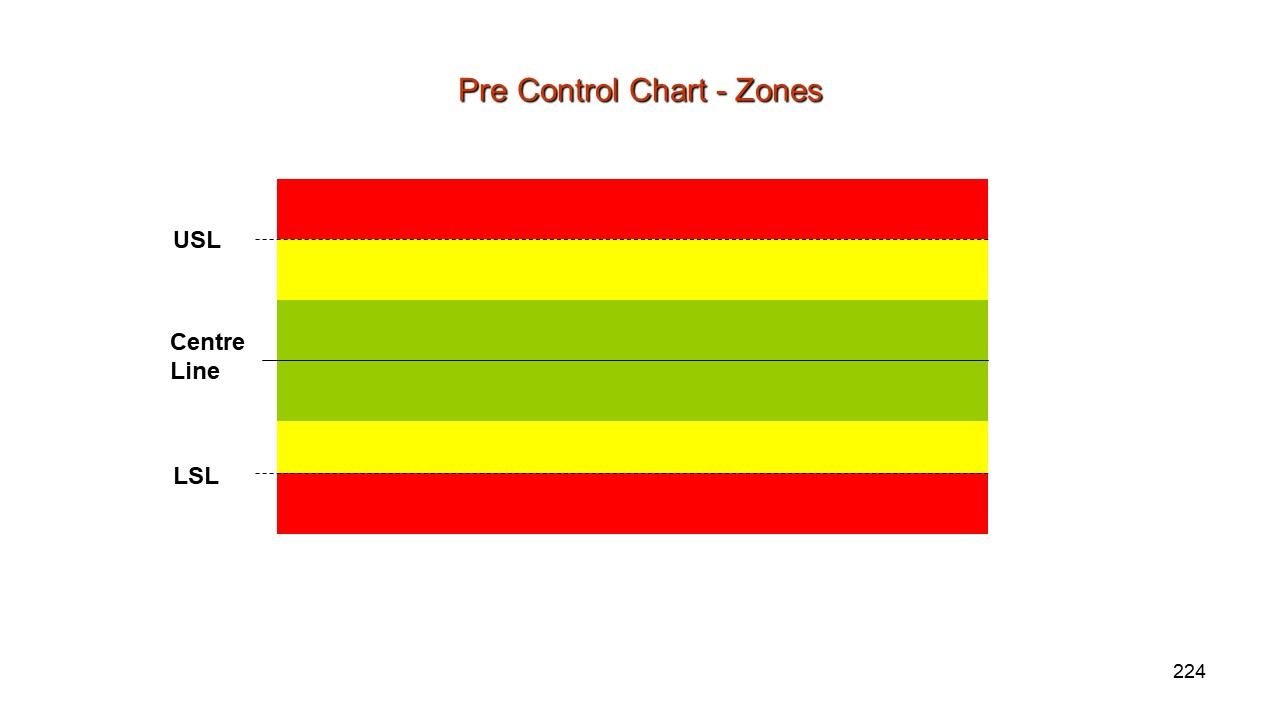 In a process with a Process Capability of Cpk=1, the upper and lower specification limits will align with +/- 3 standard deviations from the mean. Assuming a normal distribution of the output from a process, 86% of the readings will be in the green zone and 7% of the readings in either of the two yellow zones. 7% equates to one reading in 14. The probability of getting two consecutive readings in a yellow zone will be 1/14 * 1/14 = 1/196 = 0.51%. Where two samples are continually recorded there are four possible permutations, giving an overall probability of 2%, i.e. Pre Control asks for a process to be stopped and adjusted, even when operating in a capable manner 2% of the time.

Create the zones to be used in the pre-control study:

Green zones (GO SECTION) are next to centre

Yellow zones (CAUTION) are next to the limits

Zones above or below yellow area are colored in RED (UNDESIRABLE)

There is a higher sampling requirement with elevated acceptance requirement when a process is initially qualified. Also, whenever a process adjustment is performed the initial pre-control qualification needs to be performed.

This requirement for the five consecutive samples in the green zone, ensures that the process is capable before progressing into routine use.

Record two samples from the process on an ongoing basis.

Sampling rules
If the first measured sample is:

– in the yellow zone, check the next sample

– if the second sample is also in the yellow zone, reset process

Whenever the process is reset, you need 5 successive pieces inside the green zone before allowing to process to continue as normal.

Once the process is up and running, randomly sample 2 pieces at intervals to monitor the process.

For example, if the average process adjustment interval is once per eight hour shift, i.e. every eight hours, then normally six sets of two sample units will be recorded per shift.